When Leslie Jones wrote about a new period in the church’s history, in May 1966, he was not exaggerating. The Presbytery had already added Grove Place, Morriston to the existing joint pastorate, and expressed a keenness to merge in yet more struggling Morriston churches. Trinity, however felt that even a three-way pastorate was more than enough for one minister alone.

D. Leslie Jones himself was in a particularly difficult position. He not only needed to speak for what was best for Trinity, but as the pastor of Llansamlet and Grove Place needed also to consider what was best for them. Even more difficult, he was Secretary of the Pastorate Committee of the Presbytery. Trying to find a solution that would be of benefit to Trinity, Llansamlet, Grove Place and the Presbytery was going to be very difficult indeed, but that was the unenviable situation Leslie Jones was in. Before the year ended, he stepped down from Trinity’s pastorate, and took up a position in Carmarthenshire.

The problem of joint pastorates affected nearly every Presbyterian Church in Swansea, and throughout 1966 the list of possible permutations increased rapidly. By December, the elders at Trinity together with representatives from the other Swansea churches agreed to ask the Presbytery for a joint pastorate of Trinity, Llansamlet and Port Tennant, although initially Trinity’s preferred option was to keep the status quo. Geographically, the inclusion of the church in Port Tennant made little sense. But the attraction was not only that it solved the problem of who would join with whom, but it also solved a far more pressing problem: who would serve as Trinity’s pastor?

Port Tennant was currently in a joint pastorate, whose minister was Rev. John M. Davies (right). He was a firm evangelical, and a minister who preached the gospel that the members of Trinity loved so much. On Monday 5th December 1966, before the proposal was voted on by the churches concerned, he preached at a joint service in Llansamlet. The subsequent minutes of the elders’ meeting record his text (Exodus 17:11), and notes that his sermon “was preached with conviction, expository in nature, and, we believe, prompted by the Holy Spirit”. It should be no surprise therefore that Trinity gladly accepted Rev. Davies as minister. When D. Leslie Jones learned of the appointment he wrote a warm letter offering his prayerful good wishes.

The new three-way pastorate meant that Rev. Davies was only able to preach in Trinity for the equivalent of 11 Sundays a year, plus a weekly Bible Study. He remained in the manse in Port Tennant, and Clydach’s manse was sold to E. B. Goronwy’s widow.

In 1967, the minister and elders identified two areas of particular concern within the church. The first was the urgent need for a close study of the Scriptures by all church members as the primary method of being grounded in the faith. The second was to encourage more prayer amongst the members. By 1969, a third concern had arisen — that the church was not reaching the vast majority of the population of Clydach with the gospel.

These concerns should not be taken to mean that the church was declining. In fact there was a deepening sense of the presence of God within much of the fellowship, and particularly amongst the young people. God was blessing the church, but there was an increasing desire to see even greater blessing. Likewise, the concern for evangelism did not mean the gospel wasn’t being preached — it was. In addition to the Sunday preaching, evangelistic services were held each month on a Saturday evening, again often with a tangible sense of the presence of God (a sermon on Jehoshaphat by Rev. Eryl Davies from Maesteg on 20th April 1968 was particularly notable). But the gospel concern was not only for those who were in Trinity, but for the whole of Clydach — most of whom were not attending any church.

These three concerns — the study of the scriptures, prayer, and the proclamation of the gospel —were ones shared by the founders of the Calvinistic Methodists, and by the Forward Movement pioneers. So it was doubly painful that it was patently obvious to all the elders that Trinity’s hopes and aspirations were at variance with those of the denomination. The church was also increasingly embarrassed by the activities and statements of some of the leaders of the denomination. Consequently, by 1970, the problem was becoming a crisis.

The Presbyterian Church of Wales’ slide away from the gospel had been going on for many decades. In the 1920s and 30s the denomination discussed and then adopted a new ‘Shorter Declaration on Faith and Practice’, which essentially replaced the evangelical 1823 Confession. Evangelicals at the time, notably Rev. Nantlais Williams (Ammanford), had to fight fervently even for the inclusion of such central doctrines as the resurrection of Christ and substitutionary atonement, but even with these additions the declaration was a significant watering down of the original confession.

Whilst in the 20s and 30s liberalism (the rejection of the Bible as the Word of God) was one influence amongst many, by the time of the 1960s and 70s it was endemic. Like the Calvinistic Methodist fathers of old, Trinity had remained within the Church for decades, continuing to preach the gospel and hoping the denomination would return to its confessional basis. But by the 1970s it became clear that the denomination was not going to reform any time soon.

Even more importantly, the denomination’s stance was making it increasingly difficult even for Trinity to do what it believed God had called it to do. In 1811 the defining issue was over the sacraments and the ordination of ministers. In Trinity in the early 1970s, the defining issue was even more central: the preaching of the gospel Sunday by Sunday.

On particular Sundays in every Presbyterian church (called ‘rota’ Sundays), preachers would be sent from the Presbytery, rather than being specifically invited by the local churches. Despite repeated requests for preachers who shared Trinity’s love for the gospel, the Presbytery frequently allocated liberal preachers who denied the Word of God and ignored or dismissed the central tenets of the faith (though often such preachers were just as reluctant to come to Trinity as Trinity was to receive them). All those who denied the gospel but were allocated to Trinity by the Presbytery were sent their preaching expenses, but told that an alternative preacher had been invited in their place.

Consequently, the issue was not one that faced Trinity alone. Many other evangelical churches within the Presbyterian Church were facing the same agonising decisions, and these churches provided mutual support for one another. Ministers’ conferences, such as those organised by the BEC (British Evangelical Council), also provided an opportunity to seek counsel from others, and one address at a BEC conference by Dr Martyn Lloyd-Jones contributed significantly to Trinity’s thinking and debate.

As the crisis deepened, the elders went to the church with their concerns. Initially the congregation was not sure how to react, but the majority confirmed that if the minister felt that he could not remain in the denomination, then they would go with him.

If some in the congregation were initially hesitant, their doubts were soon removed — not by arm-twisting from the elders or the minister, but by a visit from the moderators of the denomination. They sought to persuade the church to stay within the denomination, but tried to do so without addressing the primary concerns. So when the meeting was opened up for discussion, one member, Oliver Williams (the father of present Bethel member Marlene Llewellyn) asked simply “Do you believe the Bible is the Word of God?”. The moderator equivocated; he couldn’t give the answer that he knew was needed. Several other members asked equally vital questions, and had similar replies.

So on 20th October 1970, a church meeting was held where a large majority agreed to write to the denomination, formally seceding. (The letter is reproduced below.) And so the date was set: 31st March 1971. After 55 years of faithful labour within the Calvinistic Methodist Church, the members of Trinity knew they had done all that they could. Reluctantly, but with a sure conviction that this was the will of God, it was time to separate for the sake of the gospel.

For John Davies it meant leaving Port Tennant and his home in the manse. For Trinity it meant leaving some old friends who felt unable to sever their ties with the denomination, and it was likely to mean leaving the building they had laboured for so long to erect.

Leaving a denomination which the church and its minister still felt deep affection for was a difficult, and in some ways heart-breaking period. The church did not set out to leave the denomination, but increasing demands came from the Presbytery to the minster and elders. They studied the proposals being made by the Presbytery, and reported their findings faithfully and diligently, but after one Association meeting in particular, it became clear that there would be no alternative but for the minster and elders to leave. When they explained the position to the congregation, the church gave them full support and voted overwhelmingly to withdraw from the denomination.

History vindicated the decision. The gospel prospered, and gospel churches grew, whilst the denomination declined. Looking back 40 years later, it’s easy to adapt the words of William Williams to fit this new situation. The decline in the denomination, and the subsequent closure of what was left of Trinity in the 1990s was not due to evangelicals leaving, but was the inevitable consequence of abandoning the gospel: 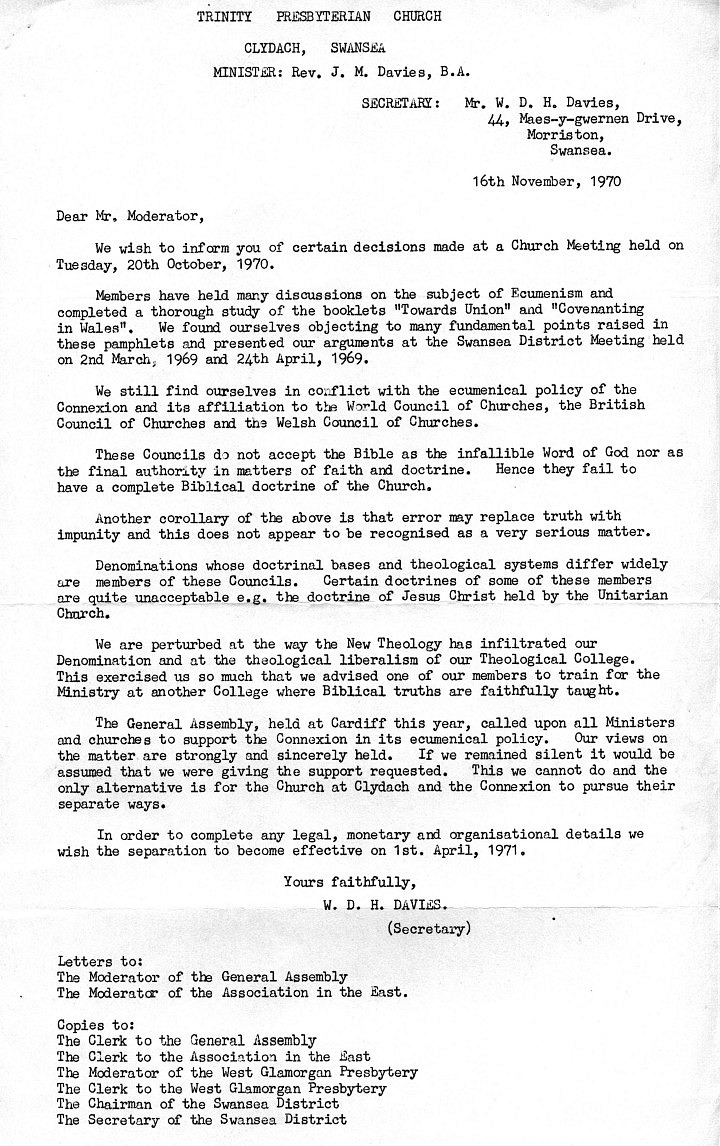 “I opened a Bible and the words “the truth will set you free” just stared at me. The next eighteen months were the best in my life.”

I got caught up in the drug world and became addicted to heroin. But by the time I was thirty, I just wanted to be clean. This lady from Teen Challenge, a Christian organisation that helps people like me, came to see me. She said that Jesus was the solution to my problem. I thought “What a joke!” but I wanted to be free and I’d already tried everything else so I gave it a go.
Read more of Alison Stewart’s story

Food for Thought
Isn’t Clydach a great place to live? It’s good isn’t it to meet with friends and have opportunities for strengthening our ties with each other? Bethel wants to help us do just this. Food for Thought is an hour long monthly lunch where we share a meal together, and listen to a short talk allowing…
More about Food for Thought…